Kohl's celebrates its 50th birthday this year.  They currently operate around 1,100 stores and generate nearly $20 billion in revenue.  Despite being quite innovative and forward thinking in certain ways (they had an internet presence starting in 1998 with online shopping since 2000), they still do liquidation of returns and excess inventory the 'old fashioned way'.

I can't explain why, but they use Genco to manage all liquidations for them.  Based on their size, I would estimate that they liquidate around $100 million per year.  If that is true, I estimate that they are leaving at least $30 million on the table, split between Genco and their buyers (with most of it going to Genco).  As anyone who has ever attempted to call the company to inquire about buying customer returns knows, you are simply told to call Genco.

If you are buying Kohl's returns, shelf pulls, overstock or job lots from anyone other than Genco, you are paying an extra layer of markup and would be better off calling Genco directly.

Consumer returns are one of the biggest areas of opportunity for people interested in buying liquidation inventory.  The market is enormous, the prices are low and sometimes the quality can be good.

So how big is this market?  While there is no perfect data on it, some research has found that approximately 8% of all retail sales end up as customer returns (excluding auto sales and food sales). Of course, this number is much higher in certain categories and lower in others.  For example, some consumer electronics categories have 30% return rates.

If you consider all US, non-auto and non-food retail sales, according to the US Census Bureau, the total sales are approximately $560 billion.  This suggests returns of approximate $45 billion (at retail value).

How to Buy Sears Liquidation Inventory

Sears liquidates a very high volume of excess and returned inventory.  They have completely embraced what I call 'the old fashioned methods' of liquidation.  That is, they have a single contract with a large liquidator to take everything.  Their biggest outlet for their returns and other liquidation inventory is Genco, who happens to operate warehouse facilities for Sears.  As you can imagine, it is a big advantage for Genco to already have Sears inventory in their possession.

It was not too long ago that Sears had a small team that was running some liquidation volume outside of the Genco contract.  Now, the two people who were running that program are no longer with Sears, so I am unsure about whether or not someone else has taken over that role.  My understanding is that they now simply rely on Genco for everything.

What this means for buyers is simply that buying Sears product means buying from Genco, or from other buyers who buy from Genco.  Either way, you are going to pay a significant markup that will be kept by Genco or the other reseller (and Genco).

Target generates nearly $70 billion of revenue out of approximately 1,500 stores and its website, Target.com.  Their ecommerce site generated $1.4 billion in 2011 revenue, which was up 9.8% over 2010 and placed them 23rd on the Internet Retailer Top 500 List.

Target sells excess inventory, returns, shelf pulls, store stock and joblots by the pallet and truckload the old fashioned way.  They have the proverbial "list" of 15 or 20 people who they have been selling customer returns and overstock inventory to for decades.  It is the classic 'old boys' network at its best.  If you can't break into that network, and most people can't, you will be forced to buy from the priveledged few who are in.  This will create a layer of markup that you will pay to those middlemen and is very likely to make the inventory unprofitable for you.

Until Target moves to a more modern solution that provides equal access to inventory for every interested buyer, my advice is to avoid these loads.

Below are two examples of the Target inventory returns manifests that get circulated widely by these few buyers who buy the loads directly.  Typically, they will blast these lists to anyone they can reach, negotiate a sale and then turn around and offer Target some amount  less than that.  Often, they will be too late and will come back to the buyer to say, "Sorry, can't do the deal."

The funny thing is that Target believes they are protecting themselves by limiting the distribution to a few buyers.  They don't realize, or choose not to acknowledge that these few buyers then blast the lists out to the world. 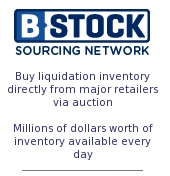